Whether you are looking to produce a new cannabis product or process your own hemp, you’ll have to choose between extraction methods. Here at Kria Botanicals, we use two methods of cannabinoid extraction: cryogenic ethanol extraction and subcritical CO2 extraction. While the end products of both methods are high-quality extracts, there are pros and cons within the extraction processes and final products that may influence which extract you’ll want to choose. Here is a breakdown of the processes that we use to produce our high-quality CBD extracts to help you choose which type of extract is best for you.

The cannabis plant is an incredibly useful plant to have as part of the botanical apothecary. It is chock full of desirable compounds, including cannabinoids like CBD, CBG, THC, and terpenes such as myrcene, caryophyllene, pinene, and hundreds more. When using cannabis, these compounds all contribute to the entourage effect, in which consuming the compounds together has a greater effect than using just one compound on its own. Extracting these compounds from the hemp flower into concentrated, full-spectrum forms makes it easier to produce cannabis products such as tinctures and gummies and allows for consumers to take higher and more accurate doses. Extraction also reduces the amount of space needed to store the same amount of cannabinoids. A common method of at-home extraction is mixing and heating butter with hemp or marijuana to produce cannabinoid-infused butter that is used for edibles.

The desirable compounds in hemp, cannabinoids and terpenes, are both nonpolar. For extraction at Kria, we use two of the safest methods of solvent extraction, cryogenic ethanol, and supercritical and subcritical CO2 extraction. Both methods result in a very high-quality final product. However, each method is best suited for certain applications and outputs, so it is important to understand the process of each when deciding what kind of extract you’ll want to use.

Ethanol extraction uses high-proof ethanol as a solvent to extract the cannabinoids from hemp to produce a full-spectrum oil. Ethanol can extract these cannabinoids ‌efficiently because it is a strong medium polarity solvent, so it can extract nonpolar compounds found in hemp, like cannabinoids and terpenes. However, because of the medium polarity, it is also efficient at extracting some undesirable polar compounds from the hemp material, like chlorophyll and sugars. These undesirable compounds can cause the extract to have a dark green flavor and can make further processing more difficult.

In order to reduce these undesirables, we use cryogenic technology that chills the ethanol down to -60℃ using liquid nitrogen. The super-chilled ethanol extracts fewer undesirable secondary compounds, resulting in a clearer, golden brown extract that is purer and easier to process.

What ethanol lacks in extraction selectivity it makes up in throughput. At Kria, we can extract about 200-400 lbs of hemp a day. Our CO2 throughput is much lower – 20-30 lbs/day – because we use a smaller machine and the extraction process takes longer.

Ethanol is one of the safest solvents used in cannabis extraction. From a worker safety perspective, the primary concern with ethanol is flammability. We perform our ethanol extraction in a C1D1 booth, which is a specially designed room for handling flammable chemicals. The booth monitors the ethanol levels and constantly refreshes the air using large fans. All electronics in the C1D1 are spark-free and rated for use with highly flammable chemicals, so there are no potential ignition sources for the ethanol fumes. Kria’s facilities have undergone extensive permitting and inspection from our municipal fire department, as well as Vermont state fire inspectors. We’re proud to have hosted a group of statewide fire officials who were interested in seeing how a professional ethanol extraction lab operates.

The first is the initial extraction, in which the cannabinoids are first separated from the hemp. The hemp gets packed into large nylon bags, which act like big tea bags, holding the hemp in the bag but allowing ethanol in to extract the cannabinoids. After being packed, we place the bags in the centrifuge, which is essentially a washing machine. The centrifuge first goes through an agitation cycle, exposing the hemp to the ethanol. Once it gets washed, the centrifuge goes through the spin cycle, where it spins at up to 1800 RPM. During these cycles, the ethanol is dissolving the cannabinoids found in the hemp flower, creating a cannabinoid/ethanol solution. At the end of the spin cycle, the cannabinoid-rich ethanol solution gets drained from the centrifuge and runs through a series of filters to ensure no particulates from the hemp remain. The bag of washed, or “spent” hemp, gets pulled out of the centrifuge and replaced with a fresh bag. At Kria, we compost our spent hemp through the Vermont Compost Company, ensuring very little waste throughout the process.

The next step is to separate the ethanol from the extract. To do this, we run the ethanol/cannabinoid solution through a falling film evaporator, which is like the distillation process used in liquor production. The solution runs through a heated honey-comb like structure, which increases the surface area, allowing for more efficient evaporation of the ethanol. Ethanol has a lower boiling point than the cannabinoids, so it boils off and gets re-condensed in a separate chamber, separating the solution into high-proof ethanol and a viscous cannabinoid-rich extract. The ethanol recovered in this process can get used again for future extractions or cleaning in the lab.

The remaining cannabinoid-rich extract is then run through a secondary devolatilization step to get rid of any remaining ethanol and other volatile compounds in the mixture, leaving it solvent-free. Unfortunately, the relatively high boiling point of ethanol means that a lot of the quality terpenes get destroyed in this process. Once the extract is solvent-free, the remaining liquid is a dark, thick oil called ethanol crude oil. This can get used as-is or further processed into the distillate.

Distilling the crude is a similar process to the falling film evaporator, but instead of separating out the ethanol, you are looking to separate the target cannabinoid from the other compounds in the crude. To keep the temperature as low as possible, the crude gets heated under a vacuum, which reduces the boiling point. We use a wiped film distillation system, which spreads the crude in a thin layer across the inside of a heated flask. The cannabinoid then evaporates off and re-condenses on a cooling coil in the center of the flask, where it drops into a collection jar.

CO2 extraction uses CO2 that is forced into a supercritical or subcritical state under high pressure and high temperatures. In these critical states, the CO2 is nonpolar and has the properties of a liquid, making it a very efficient solvent. CO2 is a much more selective solvent than ethanol, as pressure and temperature affect the solubility. This means that only the desired compound gets dissolved and ends up in the extract, which results in a much purer extract that does not require any of the post-processing required in the ethanol extraction process.

Here at Kria, we go about CO2 extraction differently than in other extraction labs. We mainly use subcritical CO2, as it is a gentler method of extraction compared to supercritical CO2. Subcritical CO2 washes the cannabinoids from the outside of the plant material without breaking through the plant cell walls, which contain undesirable compounds like sugars, chlorophyll, and lipids. When using harsher supercritical CO2 extraction, the extract needs to be “washed” using post-processing steps like winterization in order to remove these undesirable compounds. We believe in reducing the number of steps required between the original plant and the extract, as each step reduces yield and alters the chemical profile further from the original. Subcritical CO2 allows us to produce a high-quality, clean CO2 oil with no post-processing needed.

One drawback of the selectivity of CO2 extraction means that it has a much lower throughput compared to ethanol, with a 10lb oil run taking about 6 hours. However, CO2 yields an extract that is purer and closer to the original chemical profile of the plant than ethanol.

CO2 is also one of the safest solvents used for cannabis extraction. It gets used in the food industry as a method to decaffeinate coffee beans, as well as extract essential oils from other botanicals. Since the CO2 simply evaporates out of the extract, there is no residual solvent found in the extract, making it safe for consumption with no post-processing. From an operational point of view, the biggest safety issue is the high levels of pressure used in turning the CO2 supercritical, but when using purpose-built, professional equipment with built-in safety measures, as we have at Kria, the risk of failure due to pressure is extremely low.

The first step in our CO2 extraction is the terpene run. This step allows us to extract strain-specific terpene, preserving the original terpene profile found in the hemp. This gets done before decarboxylating the hemp flower, as the heat required to decarboxylate destroys the terpenes.

The now terpene-free hemp is then put into an oven and decarboxylated, or decarbed. The hemp gets heated at low temperatures for several hours, which converts the cannabinoid CBDA, which is essentially the raw form of CBD, into CBD. When heated, the CBDA molecule loses the carboxyl group that makes it acidic, converting it into CBD.

What to use each type of extract for?

When formulating a cannabis product, you’ll have to choose what kind of oil you’ll want to add to get the cannabinoids.

If you want something that is high potency but is not strongly hemp flavored, ethanol distillate is the way to go because of its high purity and potency, so a little can go a long way. If you’re using distillate in a tincture, the carrier oil will remain fairly light-colored.

CO2 crude has a stronger hemp flavor compared to distillate, as it is less processed, but it is a clean, grassy flavor with no strong off-flavors. If you’re looking to make a tincture that has a familiar hemp flavor that isn’t overpowering, CO2 crude is a good choice. If you want a more “true to plant” hemp flavor, this is where the separately extracted terpenes can get added back in. When used in a tincture, CO2 oil darkens the carrier oil slightly, but still remains a light golden brown color.

Ethanol crude has the strongest flavor and darkest color profile, as it contains relatively higher amounts of secondary compounds such as chlorophyll, sugars, and lipids. Some customers prefer the darker color and stronger, more earthy flavor of the crude when used in consumable products such as tinctures and edibles. Ethanol crude is the least expensive form of extract, while still maintaining a high concentration of cannabinoids. 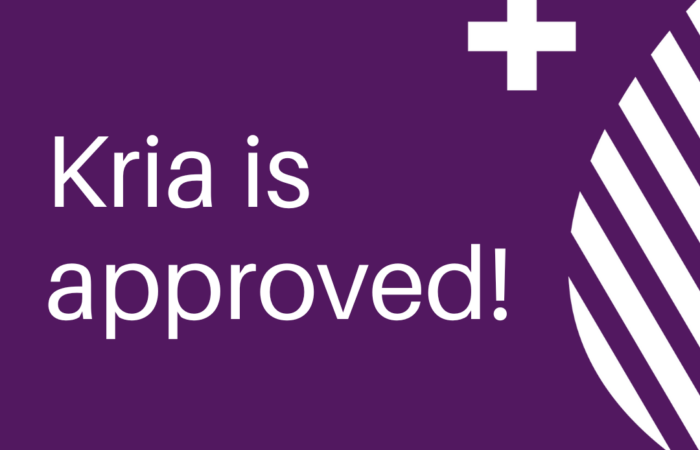 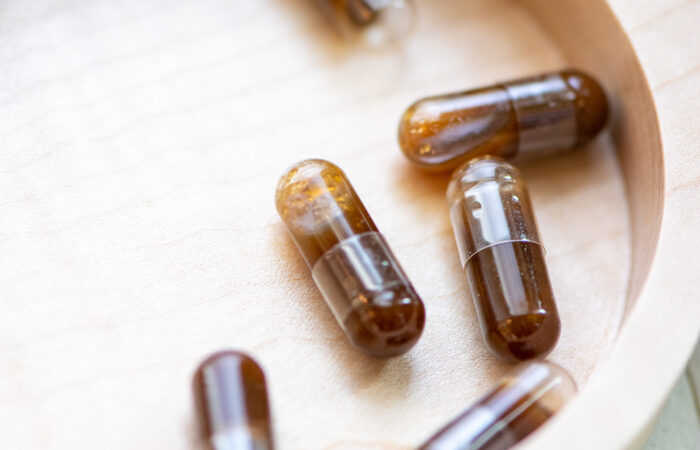